A recent "Wall Street Journal" article summarized current funding availability for biopharma with "The gravy days are over." One key issue identified: "Venture capitalists invested a total of $3.92 billion last year in biotechs of all stages, well below the $6.17 billion peak in 2007, according to VentureSource. And shares in biotechs that went public last year averaged 29% less than their expected midpoint offering price, according to investment bank Needham & Co. Some venture capitalists have stopped funding new biotech altogether."

A clear, and potentially highly ominous, warning about the future challenges in VC funding for biopharma comes from the National Venture Capital Association's October 2011 survey results; the report states:

"A 2011 study found that U.S. venture capitalists have been and will continue to:

FDA regulatory challenges were identified as having the highest impact on these investment decisions."

To address the acknowledged issues with FDA shortcomings, recent legislative efforts have been implemented to improve FDA processes and reduce review and approval time; they include:

Next 3 Years - Expected Change in Investments in Healthcare Sectors, % of Respondents 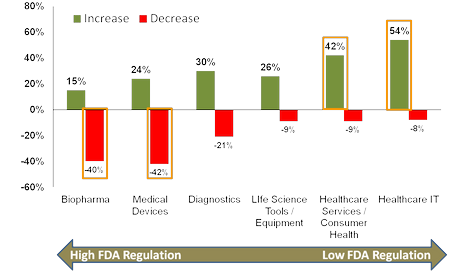 As the survey data indicates, investors are placing their bets on lower up-front investments with a lower risk profile (services, consumer health, and IT) than biopharma and devices. 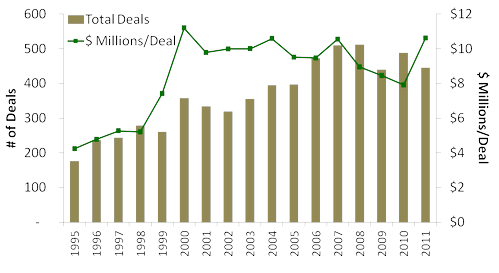 However, as many of these deals were with already established ventures (representing a lower risk population for investors), these data suggest fewer new drugs and technologies will have access to critical funding, reducing the likelihood of their development and eventual commercialization.

To dive a bit deeper, let's look at only 1st-sequence funding for the last two years. 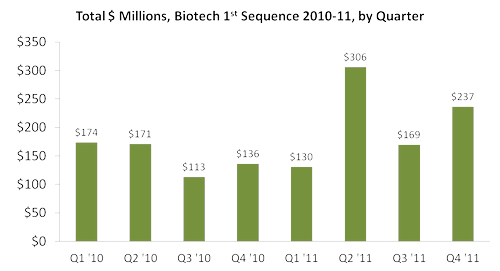 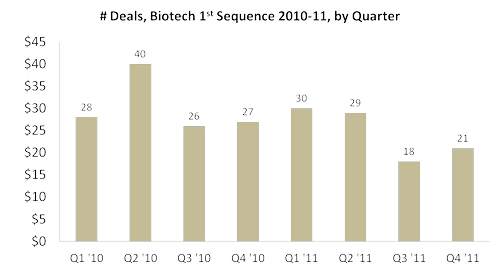 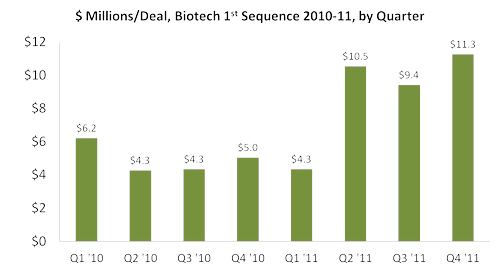 From the data, 1st-sequence funding per deal is higher in 2011 but fewer deals were executed. It is assumed that investors were being selective and funneling money to those deals with lower risk, which typically would be projects with more robust proof-of-concept data. This assumption is supported by a January 20, 2012 article in Genetic Engineering & Biotechnology News.

Key points pulled from the article:

It appears that VCs are derisking their investments by choosing to invest in later-stage and lower risk programs but are increasing the amount invested. Though this seems sensible for the VCs, this movement has an obvious chilling effect on new product development and innovation in the biopharma and device sectors as fewer early/start-ups will be funded than in the past unless there is a clear invest now signal in the opportunity's profile. Is this investment scheme a positive or negative evolutionary step? It remains to be seen as to what the downstream effects this strategy will produce but the investment hurdles are higher than in years past for certain.

Contact Partners in BioPharma Consulting to see where we can help you with developing the optimal product profile, development program, strategies, or presentations to investors. We can manage a project from beginning to end, provide contracted support, or suggest talented experts from our alliance partners to help you achieve your goals. Click here for an outline of services that can be designed to meet your needs.

The following are links that provide additional background and insights on the topics discussed in this article. We hope you find them useful!