Why Failure Is Not an Option, April 2012

No one will argue that developing new drugs is expensive and risky. The question may be how expensive is it? A review by Scott DeCarlo and Matt Herper of Forbes on drug development costs (provided by Tufts and other sources) indicates the actual investment is not in the frequently quoted $1 billion per drug, but closer to $4 billion, and perhaps as high as $11 billion!

DeCarlo and Herper pulled data from FactSet, adjusted them for inflation and divided the total R&D spending by the number of drugs approved in that time frame. The R&D spend per drug approved ranged from $3.7 billion to $11.8 billion! The data they reported: 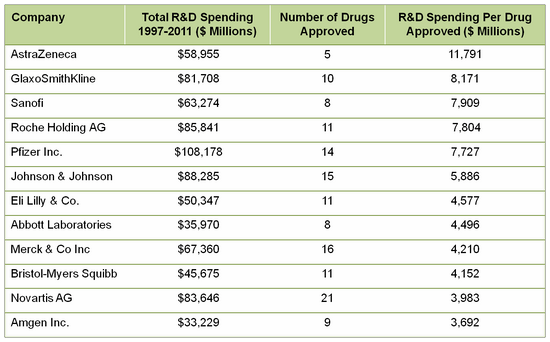 It is clear that most biopharma companies are able to develop a new product for less than $3.7 billion each. But, unanticipated failures in new product approvals and/or less than expected sales are all too real occurrences in this industry that have to be accounted for in the business plan. These data illustrate the challenge for biopharma to have sufficient new products with sales at levels to recoup R&D investment, pay operating expenses and shareholders, and have enough left over to fund further research and/or acquisitions for continued growth and profitability. The last few years of consolidation and down-sizing reflect the industry's acknowledgement of the need for change but many of these options have been played out, especially for big pharma (see "How are you coping?" for related information).

The bottom line on this situation is that the traditional drug development and operating models have to change. Changes have been made, will continue to occur, and they will likely do so at an accelerated pace. Which change or set of changes will turn out to be the most practical and profitable long-term will not be known for five to ten (or more) years to come.

There are some key market forces and movements in play that feed into the need for changes in R&D development and success rates:

Some changes being implemented:

Examples of present and future changes could continue for some additional pages. Importantly, the industry has realized that the business model must be revised. Some very smart and dedicated people are devising and implementing the changes they think are in the best interest of their companies and for the patients their products serve.

The best outcomes from this revolution are for the health of the world to improve by the development and availability of new and medically-meaningful therapies at prices that are both affordable and that will provide for a reasonable return on investment for the industry so as to incentivize continued innovation.

Contact Partners in BioPharma Consulting to see where we can assist you with developing a product profile that optimizes the value of your asset. We can manage a project from beginning to end, provide contracted support, or suggest talented experts from our alliance partners to help you achieve your goals. Click here for an outline of services that can be designed to meet your needs.

The following are links that provide additional background and insights on the topics discussed in this article. We hope you find them useful!